Queen Elizabeth II has invited 99 guests to Buckingham Palace Wednesday, and she won't need to ask anyone's age. All share the queen's birth date April 21, 1926 . The queen has laid on a three-course meal for 70 women and 29 men who, like her, will celebrate their 80th birthday on Friday. "It has always been a standing joke in the family that I've never been invited to the queen's birthday party, what with us being born on the same day, never thinking it would actually come true," said Betty Kay of Doncaster in northern England , one of the invited guests. 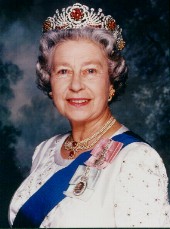 Prospective banquet guests were nominated by themselves or relatives, and 99 were chosen to represent all parts of the country. Edna Richards of Wolverhampton said she was a firm supporter of the monarchy, and admired the queen for maintaining a busy schedule. "I think she is a marvel. I don't know how she does it all. Being the same age I know how she must feel," Richards said, reports the AP.