Japan defied angry South Korean objections Wednesday and dispatched two ships to begin a survey of an area including disputed islands, raising the stakes in a territorial tiff between the Asian neighbors. The Japanese plan to survey the rocky outcroppings held by Seoul but loudly claimed by Tokyo has triggered an outcry in South Korea and prompted it to dispatch a flotilla of patrol boats to guard the territory. 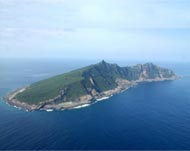 Two survey vessels docked on Japan 's west coast left port on Wednesday to begin the research, said Yuzuru Kubota, a coast guard official in Sakaiminato, where the ships were docked. He said, however that the ships were lingering just beyond the bay and were not steaming immediately toward the survey area. Japan has refused to release a schedule for the survey, but news reports said it could start as soon as Thursday.

The survey comes after South Korea conducted a similar study as part of its argument that the body of water, known internationally as the Sea of Japan, should instead be named the East Sea, as is favored by Seoul, Japanese officials say. Word of the ship leaving port came as Japanese Chief Cabinet Secretary Shinzo Abe said Tokyo had reached out to Seoul to boost diplomatic contacts to reach a "harmonious solution" to the name disagreement.

South Korean Foreign Minister Ban Ki-moon had warned Japan not to go ahead with the survey, saying his country which has long protested Japan 's repeated claims to the islets was preparing for "all scenarios" in the dispute. "If Japan pushes ahead ... we will react sternly to it in accordance with international and domestic laws," Ban told a nationally televised news conference. "The responsibility for all problems caused by this lies with Japan ."

"The government is preparing countermeasures for all scenarios," Ban said without elaborating. He spoke after President Roh Moo-hyun held a sudden meeting with security ministers to discuss the dispute. Later in the day, the South Korean parliament passed a resolution calling for a halt to the survey.

Ban's comments came after Roh on Tuesday called the survey, expected to last through the end of June, an "offensive provocation." South Korean local media have reported that Seoul may even try to capture Japanese vessels entering disputed waters. Japan , however, has flatly refused to abandon the project. Abe said earlier on Wednesday that Japan 's right to the study was protected under international law.

"I would like the South Korean side to understand this point well," Abe told reporters. " Japan will calmly proceed with its activities in line with international law." The bluster on both sides, however, was coupled with calls to find a diplomatic solution to the impasse. The two countries have sparred repeatedly in recent years over the islets, which rise from waters rich in fish and other national resources.

The dispute flared recently when Japan 's Education Ministry edited public school textbooks to say the volcanic outcroppings belong to Japan . Seoul 's ambassador to Japan issued a formal complaint over the change. The surveys are aimed at collecting hydrographic data. Japanese officials say the boats 621-ton Meiyo and 605-ton Kaiyo were to collect data before an international conference on ocean floor topography in June in Germany . South Korea was expected to propose its name change to East Sea at the conference.

The island tiff comes amid rocky relations between the two Asian neighbors. South Korea , which nurses angry memories of Japan 's harsh 1910-1945 colonization of the Korean Peninsula , has fervently objected to Japanese Prime Minister Junichiro Koizumi's repeated visits to a Tokyo war shrine considered by critics to be a glorification of Japanese militarism.

Roh canceled a scheduled summit with Koizumi last year because of the shrine visits and later avoided a customary one-on-one meeting with the Japanese leader on the sidelines of a regional conference. South Korea 's ambassador to Japan , Ra Jong-il, said that he'd seen relations between the two countries deteriorate in the two years since he arrived in Tokyo .

"This problem is another example of Japan 's long-standing attempt to distort history, and the problem must be resolved comprehensively," he told reporters at the Japan Press Club. Despite the political tension, however, economic and other exchanges between the two countries have remained intact and the two sides have also cooperated closely to resolve the dispute over North Korea 's nuclear program, reports the AP.