From fierce World War II battles to recent ethnic conflicts that saw semi-naked islanders wielding homemade rifles, the Solomon Islands have rarely lived up to their other name: The Happy Isles. When rioters stoned police and torched Chinese businesses in the Solomons' capital, Honiara , this week it was the latest convulsion of violence to rock the chain of islands northeast of Australia . Analysts said the latest violence sparked by the election of an unpopular new prime minister has its roots in the same economic stagnation and land disputes that have fueled years of sporadic fighting between rival islanders. 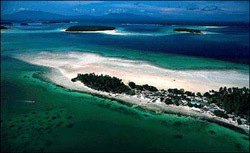 Helen Hughes, and islands expert at Australian think tank the Center for Independent Studies, said an Australian-led police force sent to the Solomons in 2003 to help end communal violence should have done more to tackle these problems. She said the Regional Assistance Mission for the Solomon Islands , or RAMSI, helped quell spiraling crime but left unresolved many of the underlying issues that stoked unrest in the nation of some 480,000 mainly impoverished people.

"We had an enormous opportunity when we came in with RAMSI and people were thankful that the violence had ceased," Hughes said Wednesday. "We should have said 'right now we're going to do something about making the land productive ... so you can afford to live like decent people,' and we haven't done that." At least 17 Australian and two New Zealand police were among those injured in the rioting, and Honiara's Chinatown was all but destroyed in a bout of rioting, arson and looting that began late Tuesday and continued Wednesday.

Australian Prime Minister John Howard on Wednesday deployed scores of troops to the country to help bring the situation under control. Hughes said anger at the Solomons' Chinese community which controls most retail businesses in Honiara was a symptom of a larger land management problem. Local clans control most land in the Solomons, and Hughes believes reforms giving people their own patch of ground to farm crops such as palm oil, copra and vanilla are key to kickstarting economic growth.

Australian economists estimate the Solomons' economy shrank by 24 percent from 1998-2002, in part because of the unrest. Hughes said Australian diplomats and peacekeepers should have concentrated on giving the islands' impoverished residents more access to land instead of propping up the country's inefficient government.

"They've done nothing to create opportunities to farm, to have cash crops, to have an income and there's been no job creation," she said. "You've got thousands of young men with absolutely no expectations, nothing to do." Another Australian analyst, Michael Fullilove from the Lowy Institute For International Policy, said corruption in government was another source of anger.

"There's a strong feeling that although RAMSI is pursuing corruption, there are still so-called big fish including within the new administration who may have been guilty of corrupt practices in the past," he said. "Until that's resolved, that will continue to stoke the tension." Several ministers in the government of Sir Allan Kemakeza were accused of graft, and he was ousted in April 5 elections. Prime Minister Snyder Lini was Kemakeza's deputy, and his election Tuesday inflamed anger among opponents. Lini himself has not been accused of corruption.

After the war, the islands returned to relative peace until tensions over land ownership emerged in the late 1990s. Fighting between two rebel forces, the Isatabu Freedom Movement and the Malaita Eagle Force some of whom fought partially naked and armed only with homemade guns escalated in 1999 as both sides battled over scarce land on neighboring Guadalcanal and Malaita islands. About 40 people were believed killed and some 20,000 were forced from their homes before an attempted coup in 2000 led to an Australian-brokered peace deal. Despite that agreement, violence continued, largely fueled by criminal warlords who rose to prominence during the previous two years of lawlessness, prompting the deployment of the RAMSI force, reports the AP.