Rumsfeld says he won't resign unless Bush asks him to

Donald H. Rumsfeld said Tuesday he has not considered resigning despite demands by a half-dozen retired generals, and whether he should remain as secretary of defense is up to President George W. Bush. 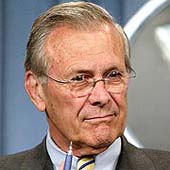 Rumsfeld says he won't resign unless Bush asks him to

Asked at a Pentagon briefing whether he would consider resigning to ease political pressure on Bush and Republicans in Congress, Rumsfeld said, "No."

"The president knows, as I know, there are no indispensable men. ... He knows that I serve at his pleasure, and that's that," Rumsfeld said.

Rumsfeld spoke several hours after Bush reiterated his support for Rumsfeld. "I'm the decider, and I decide what's best, and what's best is for Don Rumsfeld to remain as the secretary of defense," Bush told reporters in the White House Rose Garden as he announced several White House staff changes, reports AP.

Taking questions from reporters in the White House Rose Garden, Mr. Bush says he listens to all the voices, but his is the final decision.

"Don Rumsfeld is doing a fine job," Mr. Bush says. "He is not only transforming the military, he is fighting a war on terror. He is helping us fight a war on terror. I have strong confidence in Don Rumsfeld. I hear the voices. And I read the front page. And I know the speculation. But I am the decider. And I decide what is best. And what is best is for Don Rumsfeld to remain as the secretary of defense", informs Voice of America.

Marine Corps Gen. Peter Pace, chairman of the military's Joint Chiefs of Staff, said he does not believe there is dissatisfaction in the military ranks over Rumsfeld's leadership. Pace, speaking at Rumsfeld's side, also said senior military officers have ample opportunity to have their views heard by the Pentagon's civilian leadership.

"There are multiple opportunities for all of us, whatever opinions we have, to put them on the table. And all the opinions are put on the table," Pace told reporters.

"But at the end of the day, after we've given our best military advice, somebody has to make a decision. And when a decision's made by the secretary of defence, unless it's illegal or immoral, we go on about doing what we've been told to do," he said.