UNHCR pulls out of Uzbekistan on orders of government

The U.N. refugee agency said Tuesday it had pulled out of Uzbekistan in compliance with a government order to leave the central Asian country. The U.N. High Commissioner for Refugees, which has sought to block the return of Uzbek asylum seekers from neighboring Kyrgyzstan , closed its office Monday, said spokeswoman Jennifer Pagonis. 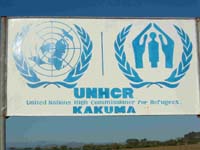 UNHCR pulls out of Uzbekistan on orders of government

The agency announced March 20 that Uzbek authorities had given it one month to leave, saying UNHCR had "fully implemented its tasks and there are no evident reasons for its further presence in Uzbekistan." The government previously had accused UNHCR of protecting criminals and terrorists who fled the country following the bloody suppression of an uprising last May. UNHCR, which had been working in the country since 1993, said it regretted the order to leave.

"We only work in a country by invitation and in support of the government," Pagonis told reporters in Geneva , where UNHCR is headquartered. "In those exceptional situations where we are asked to leave, we leave."

She added, however, that a special arrangement with the United Nations Development Program would ensure that some 1,800 refugees in Uzbekistan , mostly Afghans, are provided with basic care and assistance. "Our work in the country was ongoing and many refugees continued to depend on assistance from us," she said.

At the center of tensions between the government and the agency have been hundreds of refugees from Uzbekistan who fled to Kyrgyzstan following the bloody suppression of an uprising in the eastern Uzbek city of Andijan . UNHCR recognized most as refugees and evacuated 439 of the Uzbeks from Kyrgyzstan to Romania . Over half of the refugees have since been resettled from Romania in other countries; the others are still waiting to leave Romania .

In recent months, the dispute has come down to four Uzbek refugees, two of whom were denied asylum by the Kyrgyz Supreme Court in February despite their being granted refugee status by the United Nations. UNHCR has urged the Kyrgyz government to refrain from any action aimed at forcibly returning the four refugees to Uzbekistan , where Western nations and rights groups say they might be tortured. Last year, Uzbek courts convicted more than 150 people in connection with the Andijan uprising in closed-door trials criticized by human rights groups as a government-orchestrated show with evidence allegedly coerced by torture, reports the AP.