Police removed the last protesters occupying a French university, and classes resumed at many schools Tuesday after weeks of marches and strikes against a youth jobs law. Scattered groups of students planned anti-government protests Tuesday, but most students not still on spring break returned to school. At the height of the two-month-long crisis, nearly 60 of the country's 84 universities were shut or had classes disrupted or canceled. 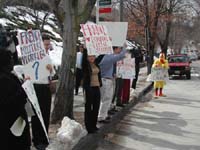 The protest movement quickly dwindled after the government announced last week it was scrapping the youth jobs measure that would have made it easier to hire and fire young workers and brought masses into the streets. Within days, parliament approved a fast-track revision to the contested plan, completing an embarrassing about-face for President Jacques Chirac's conservative government.

Overnight, police dislodged students occupying the Sociology department at the University of Nantes in western France , and classes there resumed Tuesday peacefully. The move came after a top French education official urged universities Sunday to call in police to remove holdout protesters still blocking classrooms. Students and teachers at Nantes university began cleaning up buildings that had been occupied. Some were vandalized or badly damaged during the occupation, with walls scrawled with graffiti and garbage strewn across floors.

Classes resumed at the University of Rennes II in Brittany in the northwest, but a few students were calling for more strikes, University president Marc Gontard said on LCI television. He estimated that the occupation had cost the school Ђ 100,000 (US$120,900) in damages. Students at the only other university still closed as of last week Toulouse II in the southwest were voting Tuesday on whether to return to class, reports the AP.