Israel said Tuesday that it holds the Hamas-led Palestinian Authority responsible for the deadliest suicide bombing in 20 months and debated whether to target it directly as an "enemy entity" even though the attack was carried out by a different militant group. Monday's blast outside a packed Tel Aviv fast food restaurant killed nine civilians and wounded dozens during the Jewish Passover holiday, and troop reinforcements were deployed across Israel for fear of more attacks. The 21-year-old bomber, a West Bank university dropout, was sent by the Iranian-backed Islamic Jihad group. 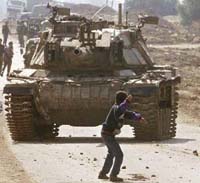 Israel's U.N. ambassador, Dan Gillerman, told the U.N. Security Council that the Hamas government's verbal support for the bombing, as well as recent statements by Iran and Syria, "are clear declarations of war, and I urge each and every one of you to listen carefully and take them at face value." Gillerman said a new "axis of terror" Iran , Syria and the Hamas government was sowing the seeds of the first world war of the 21st century. Israeli Prime Minister-designate Ehud Olmert convened key Cabinet ministers and security chiefs Tuesday to discuss a response. One proposal was to hold the Hamas government directly responsible and declare it an "enemy entity," according to an Israeli official close to the consultations who spoke on condition of anonymity because the ministers had not yet made their decision.

The meeting lasted two hours. Public Security Minister Gideon Ezra, speaking to Israel Radio, refused to outline what decisions were made, saying he did not want to tip off militant groups. Israel Radio said one of a list of measures was to crack down on Palestinian laborers sneaking into Israel without permits. Israel has been unable to keep out Palestinians in the past, despite security closures. Israeli security chiefs had proposed tightening travel restrictions, including making it harder for Palestinians to move between different parts of the West Bank and extending a blanket closure of the West Bank and Gaza . The bomber came from the northern West Bank , and the military planned to step up raids in that area. The army also proposed intensifying targeted killings of Islamic Jihad activists.

In an initial response, Israeli aircraft attacked an empty metal workshop in Gaza City early Tuesday, causing no injuries. The army said the workshop was used by the Popular Resistance Committees militant group to manufacture homemade rockets to launch at Israel . Monday's bombing was the first inside Israel since Hamas came to power at the end of March. Islamic Jihad threatened more attacks, saying it had trained 70 more would-be suicide bombers both men and women who were prepared to carry out new bombings.

A confrontation between Israel and Hamas could endanger Hamas' efforts to secure desperately needed international aid and acceptance. The government is broke and has been unable to cover the large public payroll, despite aid pledges of $50 million ( Ђ 41 million) each by Iran and Qatar in recent days. "Defense or sponsorship of terrorist acts by officials of the Palestinian Cabinet will have the gravest effects on relations between the Palestinian Authority and all states seeking peace in the Middle East," White House press secretary Scott McClellan said.

Moderate Palestinian President Mahmoud Abbas condemned the bombing and said it harmed the Palestinians' national interest. However, the Palestinian U.N. observer, Riyad Mansour, who is close to Abbas, noted that Israeli military strikes in Gaza earlier this month also killed 19 Palestinians, including two children. The bomber struck during Monday's lunch hour at "The Mayor's Felafel" in a busy neighborhood near Tel Aviv's central bus station. The restaurant, which had been the target of a January bombing, was packed with Israelis on vacation during the weeklong Passover holiday.

A guard outside was checking the bomber's bag when the bomb exploded, police and witnesses said. "Suddenly there was a boom. The whole restaurant flew in the air," said Azi Otmazgo, 35, who was inside and was wounded on his hands, foot and head.

The bomb, laced with nails and other projectiles, shattered car windshields, smashed windows of nearby buildings and blew away the restaurant's sign. Glass shards and blood splattered the ground. Police said the guard was torn in half by the blast. Six Israelis and two Romanian workers were among those killed. One woman was killed while standing near her husband and children who were lightly wounded, witnesses said.

In Gaza , Islamic Jihad militants handed out pastries on the streets in celebration. The attack was the deadliest since a double suicide bombing on two buses in the southern city of Beersheba Aug. 31, 2004 , killed 16 people. It was the second major Passover bombing in four years. An 2002 attack at a hotel in the coastal town of Netanya killed 29 people and triggered a major Israeli military offensive.

Islamic Jihad identified Monday's bomber as Samer Hammad from a village outside the northern West Bank town of Jenin . In a video released by the group, Hammad said the bombing was dedicated to the thousands of Palestinian prisoners in Israeli jails. "There are many other bombers on the way," he said, reports the AP.