Police said Tuesday they had arrested 100 people in a crackdown on a prostitution ring which brought Russian women to Spain . A police statement said more than 70 Russian women were detained in the raids, which were carried out in five Spanish provinces. 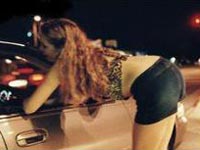 Police said the gang, run by a Russian identified only by his first name, Andrei, obtained Schengen visas issued by the French embassy in Moscow for the women and purchased air and bus tickets to get them to Spain, where they worked in brothels run by Spaniards.

The women ran up major debts with the gang, making it almost impossible for them to break away. Authorities' attention was first drawn to the gang at the end of 2004 when eight Russian women were quizzed in Duesseldorf airport, Germany . They told police they were headed for Spain where they would be forced to work as prostitutes for a Moscow-based gang which had provided them with tickets and visas, reports the AP.