The pro-Kremlin speaker of Russia 's lower house of parliament said Tuesday that the chamber would not vote to change the constitution to allow President Vladimir Putin to run for a third term in 2008. State Duma Speaker Boris Gryzlov's statement came several days after a civic organization in southern Russia made the latest in an intermittent series of calls for Putin to remain in office after his current term expires, which would require a change in the 1993 constitution that limits presidents to two consecutive terms. 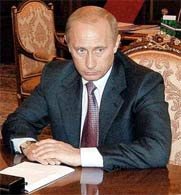 Asked about the latest initiative, Gryzlov said that the pro-Kremlin United Russia party, which he leads, would use its dominance in the lower chamber to prevent changes to the constitution which Putin has said should not be altered to allow him to run in 2008. "The president has repeatedly declared his approach to the issue of constitutional changes: he considers it inadmissible," Gryzlov told reporters. "As leader of the majority parliamentary faction, I have also said more than once that we will use our constitutional majority to keep the constitution intact."

A number of politicians and groups have called in recent years for Putin to remain in office past 2008, and some analysts believe the Kremlin has not ruled out an effort to keep him in power despite statements in which he has expressed opposition to changing the constitution and indicated he will step down. Constitutional changes require approval by a two-thirds majority in the Duma, a three-fourths majority in the upper house and local legislatures in at least two-thirds of Russian provinces something the Kremlin could likely muster easily.

Putin enjoys strong public support and pro-government lawmakers dominate parliament. But extending his time in office would further blacken his reputation among Western governments that accuse him of backtracking on democracy, reports the AP.