Russia 's U.N. envoy expressed hope that Iran would suspend uranium enrichment by an April 28 deadline, as senior diplomats from six countries prepared to meet over dinner in Moscow on Tuesday to try to map out the next steps toward solving the Iranian nuclear crisis. Ambassador Andrey Denisov refused to predict what will happen if Iran does not suspend enrichment a process that can help make a nuclear bomb before the deadline. But he insisted that the standoff be solved diplomatically. 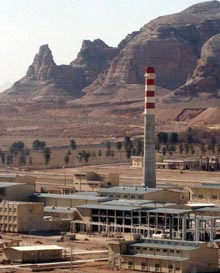 "In 18 or so years in developing of (the) nuclear program in Iran , there are some gaps, some unclear pages that we want to clarify," Denisov said at the United Nations on Monday, adding later: "Let's wait until April 28. April 28 that is an end date for that process."

April 28 is when the Security Council has asked the International Atomic Energy Agency, the U.N. nuclear watchdog, to report back on Iran 's progress toward clearing up suspicions about its nuclear program. The United States and Britain say that if Iran does not comply with the Security Council's demand to stop uranium enrichment, they will seek a resolution that would make the demand compulsory. So far, Iran has refused to give up enrichment, though it insists its nuclear program is for peaceful purposes. The United States and its European allies believe Iran is seeking a bomb, while Russia and China allies of Iran acknowledge suspicions but refuse to go much further.

Denisov suggested that the international community should not necessarily be discouraged by Iran 's insistence that it will not give up enrichment. "We all know that for centuries Iranians had a reputation of very tough bargainers," Denisov said. "I hope that the final outcome will be positive. We prefer to be optimists."

Russia and China , which have strong economic ties with Iran , have opposed the U.S. push for sanctions against Tehran . Russia is building a nuclear power plant in Iran 's southern port of Bushehr and has sold weapons to Tehran . Even though Russia continues to call for more diplomacy, analysts say that Tehran 's stubborn refusal to halt uranium enrichment efforts would make it hard for both Moscow and Beijing to stave off a U.S. push for sanctions.

" Russia will search for ways of settlement without sanctions and the use of force ... but Iran must show wisdom and flexibility," said Alexei Arbatov, the head of the Moscow-based Center for International Security. "If Iran doesn't help, Russia won't be able to do anything." Iran 's ambassador to Russia , meanwhile, suggested that his country would prepare for war if necessary, according to the ITAR-Tass and Interfax news agencies.

"One of the ways to prevent a war is to be prepared for it. But Iran will do everything possible to avoid any war in the region," Gholamreza Ansari was quoted as saying. "We hope the Iranian question will be resolved through negotiations," he also was quoted as saying. The agency gave no further details of his comments or the context in which they were made, reports the AP.