Sept. 11 conspirator Zacarias Moussaoui suffered a traumatic childhood that transformed him from a boy with a sense of humor who made friends easily to a man who spurned his family and embraced radical Islam, a defense witness testified Monday. 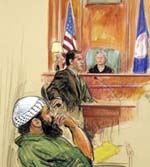 Jan Vogelsang, a clinical social worker, said at Moussaoui's death-penalty trial that the 37-year-old Frenchman was in and out of orphanages the first six years of his life. As a teenager, she said, he was rejected as a "dirty Arab" by the family of his longtime girlfriend, with whom he lived briefly and won dance contests.

Moussaoui was dismissive of the social worker's analysis. He shouted, "It's a lot of American B.S.," as he left the courtroom for the lunch recess.

The jury also heard videotaped testimony, taken in France in December, from Moussaoui's sister Jamilla, who described her younger brother as "a pretty little baby, always smiling. ... He was the little sweetheart of the family." She also described the abusive atmosphere caused by their father, Omar, who repeatedly beat Jamilla and the siblings' mother.

Moussaoui was in jail in Minnesota during the Sept. 11, 2001, attacks. The jury has decided that lies he told federal agents a month earlier kept authorities from identifying and stopping some of the hijackers, making him responsible for at least one death that day and qualifying him for the death penalty.

Now jurors are deciding whether Moussaoui deserves execution or life in prison.

In her videotaped testimony, Moussaoui's sister said their father would intervene in their lives even after the parents had divorced, and "each time he reappeared in our lives, it was to traumatize us."

"He left us completely destitute," she testified. "He was a man who never should have had children."

As Vogelsang started testifying Monday, she said she did not intend to make excuses for Moussaoui's actions as a terrorist but wanted to explain how he reached that point. She never interviewed Moussaoui herself, relying instead on interviews with 50 family members, friends and others, like teachers, who knew him, reports AP.