A U.S. envoy returns to Kosovo Friday to press for action on U.N.-mediated efforts to resolve the territory's postwar status, and was expected to push ethnic Albanian leaders to grant more rights to minority Serbs. 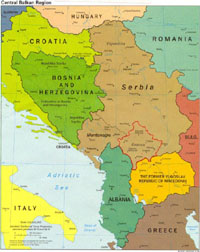 Frank Wisner, a U.S. envoy assigned to try to move the negotiations forward, will meet with Kosovo's leaders and tour part of the province during the two-day visit, his second trip to the region, said a spokeswoman for the U.S. office in Kosovo, Wendy Kolls.

Kosovo's ethnic Albanian's want independence for the tiny province, formally part of Serbia-Montenegro. Serb leaders insist on maintaining at least some control over Kosovo and want the province's minority Serb communities to be granted more rights to manage their own affairs.

The U.N.-brokered talks began in February and aim to find a solution by the end of the year. The next round of talks is scheduled for May 4 in Vienna, Austria.

Kosovo has been a U.N. protectorate since 1999, when a NATO air bombardment stopped a crackdown by Serb forces on ethnic-Albanian separatists.

On this visit, Wisner will try to force some progress in key areas of disagreement from earlier rounds of talks in Vienna.

In particular, he will be pushing for protection of minority rights and cultural and religious sites such as the 14th century Decani Monastery, a well-preserved Serb Orthodox site, which he will tour, Kolls said.

Kosovo's Serbs have refused to participate in local institutions since a brief period of ethnic violence reignited in March 2004, and a key aim of the U.N. negotiators is to give Serbs a voice in Kosovo to help stabilize the province before any possible independence, reports the AP.