Nepal 's King Gyanendra broke his silence Friday after more than a week of pro-democracy protests in which four people have died, calling for dialogue with the country's main political parties. The political parties, however, rejected the king's plea and vowed instead to continue with protests that have filled the streets for the past eight days to demand Gyanendra's ouster 14 months after he seized control of the government. 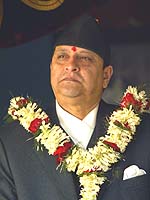 Representatives of the alliance of the seven major political parties were meeting in Katmandu on Friday to decide their next move to pressure the king to restore democracy. "The king has failed to address the protests and the movement for democracy. He is only using the offer for dialogue to try prolong his rule," said Krishna Sitaula of the Nepali Congress party, the largest party in Nepal .

"We will intensify the protests until we get rid of the autocratic monarchy," Sitaula said. Amrit Bohara, leader of the Communist Party of Nepal, said that, "People are pouring to the streets against his rule and he does not seem to care." In a message for Nepal 's new year, Gyanendra called for "the active participation of all political parties committed to peace and democracy," and he again said the country should hold a general election, although he did not specify a date.

The king's call for elections is in line with a roadmap back to democracy he announced shortly after seizing power in February 2005. It has been roundly rejected by his opponents, who demand that a special assembly be convened to rewrite the constitution and limit his role. "He has not moved an inch" from the road map, said Minendra Risal of Nepali Congress Democratic party.

The speech was broadcast just after midnight Friday, and most people heard it only later in the morning. Hours later the political parties were meeting to decide how they are going intensify the protests.

"We are deciding on how to step up our protests including strictly enforcing the general strike imposed since last week," Krishna Sitaula of the Nepali Congress said. Government officials said they were prepared to deal with the threats by the political parties. "We will react as we have to," Information Minister Shrish Sumshere said about opposition plans to extend the strike.

There were more cars on the roads in the capital Katmandu and the main cities in Nepal compared to previous days, but the highways were deserted on Friday, the ninth day of the general strike.

"There was not much the king offered to his opponents. The stubbornness is not going to be good for the country which is already deep in crisis," businessman Nirmal Shrestha said. "He should have offered to talk with the parties and the rebels without setting any conditions."

A few smaller rallies were reported in Katmandu and other parts of the country but no major protests took place mainly because Friday is a new year holiday. Most Nepalese spend the day with their family and visit temples. However, about 1,000 demonstrated in the resort town of Pokhara , about 200 kilometers (125 miles) west of Katmandu . The protest was peaceful and police did not intervene.

During the previous eight days, thousands of activists joined rallies in Katmandu and elsewhere demanding a restoration of democracy, some of them chanting "Hang King Gyanendra!"

Many demonstrations have deteriorated into bloody clashes between stone-throwing protesters and security forces, who have responded with tear gas, rubber bullets and, in some cases, live ammunition. Nepal 's opposition along with a well-armed communist insurgency argue that any elections held under Gyanendra's rule would be neither free nor fair.

In the speech, Gyanendra did not mention the opposition protests, or the insurgency, which has left nearly 13,000 people dead in the past decade. Gyanendra said in February 2005 that he took control of the country to stamp out political corruption and end the communist insurgency. Many of Nepal 's 27 million people at first welcomed the move. But the insurgency has since intensified and the economy has worsened, fueling broad discontent.

Nepal 's seven main political parties launched the latest wave of protests and a general strike on April 6 to demand that the king restore full democracy. The royal government responded harshly. Four people have been killed by security forces firing at the protesters and hundreds have been injured. The U.N. has condemned Nepalese security for excessive use of force.

The authorities have begun easing off in the past two days, and on Thursday lifted a night curfew in Katmandu and restored cell phone service, which was cut seven days earlier to keep protests from being organized. The government lifted the daytime curfew Wednesday, reports the AP.