The European Union has often struggled to persuade governments to look beyond narrow national interests, as it inches toward its goal of becoming a vast free market. But now an unabashedly populist ideal is taking root among governments: economic patriotism. A series of government moves to block foreign takeovers is fueling concern that a surge in protectionism could threaten the EU's economic progress, just when competition from Asia is making liberalization more urgent than ever. 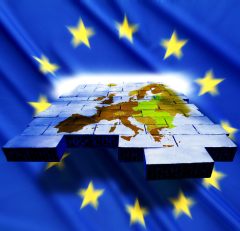 Several countries have intervened to protect their corporate "champions" from rivals in other European Union states, as a more isolationist reading of economic interests gains ground. Coming less than a year after voters in France and the Netherlands rejected a draft EU constitution, the trend has raised alarm about the future of Europe 's single market and the enforcement of rules underpinning it.

"The unraveling of Europe , even as an economic actor, is unfortunately a possible scenario," said Dominique Moisi, a special adviser at IFRI, the French Institute for International Relations. With its avowed policy of "patriotisme economique," France has attracted much of the blame for the outbreak of inwardness.

In barely three months, Dominique de Villepin's government has engaged in an frenzy of protectionist activity, including: Decreeing its right to veto cross-border deals in 11 "strategic" sectors.

Opposing a takeover bid by Netherlands-based Mittal steel for Luxembourg-based steelmaker Arcelor, which employs nearly 30,000 people in France . Waving through a merger between French utilities Gaz de France and Suez to discourage a bid for the latter by Italy 's Enel. Rushing in legislation allowing French companies to repel hostile bidders by diluting their capital.

The new takeover rules inspired in part by the panic over Suez's vulnerability to a possible bid from Enel cast France in a particularly bad light, according to Collette Neuville, president of the Minority Shareholders' Defense Association. "I don't think it's ever a good plan to change the rules in mid-game. It doesn't send a positive message to investors," Neuville said.

"Every country protects its national industries to some extent, without shouting about it too much," she said. "But in France we shout about it and we do it badly we have all the drawbacks without the advantages."

Spain , whose economy has boomed because of foreign investment, has also introduced laws that look tailor-made to thwart a bid for national electricity champion Endesa by Germany 's E.On. Poland , once the poster child of a "new Europe " with everything to gain from integration, provoked an EU legal challenge by blocking the acquisition of a Polish bank by Italy 's UniCredit, a deal already cleared by Brussels antitrust authorities.

Even tiny Luxembourg , whose wealth now depends on cross-border cash flows not steel seriously considered new rules that could have thwarted Mittal's bid for Arcelor, the Grand Duchy's biggest employer. Lawmakers eventually dropped the key amendment, which would have prevented hostile bidders from resubmitting a second offer within 12 months.

The EU hit back last week, announcing simultaneous legal moves against France , Spain , Italy and 14 other member states, aimed at opening markets from energy to advertising. But Pierre-Cyril Hautcoeur, an economist with the Paris-based School of Advanced Studies in Social Science, believes Brussels ' failure to see the positive side of social protection is partly responsible for the surge of economic nationalism.

"The main EU institutions are so obviously hostile to any form of collective protection on a European scale that national governments are jumping in and doing it for themselves," Hautcoeur said.

Some measure of state intervention is justified to protect workers from globalization's most brutal economic jolts, Hautcoeur argues providing it helps them adapt to the new status quo, rather than maintaining the old one. "To facilitate the transition, the protection has to be both moderate and temporary, not just a tool for conserving the past," he said.

The referendum of May 29, 2005 , in which France rejected the EU draft constitution followed by Dutch voters three days later has also fed patriotic sentiment, observers say.

"The feeling is, 'Oh well, we can do whatever we want now, because there's nothing that we're undermining,"' IFRI's Moisi said. Although U.S. lawmakers and Chinese authorities have also taken protectionist swipes at foreign investors of late, Moisi added, the reflex is more self-defeating for the much smaller nations of Europe , which should instead focus on creating European champions.

"If national champions are playing against European champions then we won't be playing in the big league," he said. Economists are divided over whether recent events mark a true step backward for Europe 's economic development and integration.

If anything, the patriotic talk shows that the single market is alive and kicking, according to Katinka Baysch, chief economist with the London-based Centre for European Reform. European mergers and acquisitions have meanwhile shown strong growth, she points out.

"If you didn't see a counter-reaction, that would be a sign that nothing was happening," Baysch said.

She also cited recent EU dumping duties on shoe imports from China , which have taken a softer approach than last year's quotas imposed on Chinese textile shipments retracted weeks later after it became clear that the mounting piles of blocked goods at docksides were doing more economic harm than good. "Europeans have learned a lesson from that," Baysch said. But others see a serious threat to much-needed progress on Europe 's still-incomplete single market.

"Anti-reform attitudes have stalled economic integration, and stalled integration will turn people further against Europe ," hobbling efforts to liberalize services markets, said economist Lorenzo Codogno who was speaking to the Associated Press shortly before leaving Bank of America to join the Italian Treasury this week. Brussels last week accepted European Parliament amendments that substantially watered down its latest services proposals. "If you don't reap the benefit of the single market, people would start thinking, 'Why Europe?"' Codogno said , reports the AP.