The Czech Foreign Ministry said Friday it would not renew a visa for a Cuban diplomat in Prague in response to the expulsion of a Czech diplomat from Havana . Spokesman Richard Krpac said the diplomat's visa expires April 19. He did not identify the diplomat. 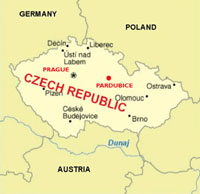 Krpac said the Cuban charge d'affaires in Prague , Ayme Hernandez Quesada, was informed of the decision. On Thursday, the first secretary of the Czech Embassy in the Cuban capital did not have his visa extended and was given 72 hours to leave the communist Caribbean island. His visa expires Friday.

The Czech Foreign Ministry said it considered the expulsion of its diplomat from Havana to be a "result of the Czech Republic 's long-term policy aimed at protecting human rights ... in Cuba ." The Czech government has repeatedly criticized Fidel Castro's government and offered help to Cuban dissidents, reports the AP.