A hospital administrator and his driver in northern China have admitted to storing the explosives that detonated at the facility this week, killing at least 31 people, the government said Friday. Wang Jinsheng, the administrator, and his chauffeur, Wang Guohua, gave themselves up Thursday to police in Yuanping, a city in Shanxi province, the official Xinhua News Agency said. 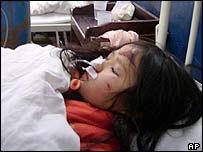 Wang Jinsheng said he stored more than 2 tons (1.81 metric tons) of explosives in the garage of the hospital for use in his private coal mine, Xinhua said. It wasn't clear if the two men were related, but Wang is a common surname. They were detained by police for "illegal purchase, transportation and storage of explosives," Xinhua said.

Investigators were still trying to determine what caused the explosives to ignite. The blast Monday destroyed two stories above the garage and badly damaged another nearby five-story residence for hospital staff, reports the AP.