The boy chosen by the Chinese government as the reincarnation of the Tibetan holy figure the Panchen Lama made a rare public appearance at an international Buddhist conference on Thursday. 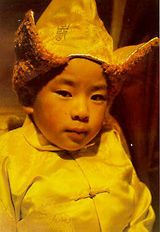 Gyaltsen Norbu, the second-highest figure in Tibetan Buddhism, was seated on stage at the opening of the five-day World Buddhist Forum, a gathering of about 1,000 monks, nuns and scholars from more than 30 other countries that China is using to showcase its cultural diplomacy and its willingness to use traditional beliefs to ease social tensions.

Beijing installed Norbu, 16, as the 11th Panchen Lama in 1995, rejecting another boy chosen by the Dalai Lama, the religion's exiled leader and one of the figures most reviled by the Chinese government.

The tall, thin teenager delivered a 10-minute speech in Tibetan that according to an official translation dwelt on Buddhism's responsibility to foster patriotism and national unity.

He praised his predecessor, who was imprisoned for years after openly criticizing Beijing's politics in Tibet in 1962, for having made "outstanding contributions to the unity of the country and the solidarity of the people."

The five-day World Buddhist Forum gathers about 1,000 monks, nuns and scholars from more than 30 other countries. It began Thursday with a series of speeches by Chinese government officials heralding the country's social progress under Communist Party rule.

Buddhist monks and nuns stood silently behind them, against a backdrop of a huge figure of the Buddha, and flanked by the five-color Buddhist flag, reports the AP.