Police arrested three people on Wednesday accused of aiding Italy's No. 1 fugitive and reputed Mafia boss Bernardo Provenzano, who was captured a day earlier after four decades on the run. 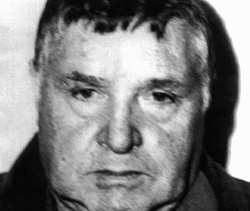 A police official in Palermo, Sicily, who requested anonymity because he was not permitted to speak publicly on the matter, confirmed the three had been picked up for allegedly helping Provenzano by passing on messages and packages while he was in hiding.

Provenzano, the reputed Mafia "boss of bosses," was captured Tuesday in a farmhouse outside his power base of Corleone, Sicily, the town that inspired the family name in "The Godfather" book and films.

Giuseppe Gualtieri, head of operations for Palermo police, told Sky TG24 television on Wednesday that the three newly arrested people had played the role of "associates, who took care of keeping the boss in touch with the outside, with his exchange of communications, packages, help, even from a logistical point of view."

He said Provenzano's capture was a "point of departure" for investigators who will now be looking into his support network as well as the internal organization of the Cosa Nostra. He said the criminal organization has an internal structure that gives it the ability to find new leadership quickly.

The ANSA and Apcom news agencies said police investigators spent the night reviewing the notes seized in Provenzano's hideout when he was arrested. Turncoats have said Provenzano gave orders with written notes, known as "pizzini", not trusting cell phone conversations for fear of being monitored by police.

The reports said the notes had been sent to Provenzano from Mafia families across the island and referred to various interests of the Cosa Nostra, in particular public works contracts.

Under Provenzano's leadership, Cosa Nostra increasingly spread its tentacles into the lucrative world of public works contracts in Sicily, making the Mafia less dependant on traditional revenue-making operations such as drug trafficking and extortion, investigators have said, reports the AP.