Raj Kumar, a onetime child actor who became one of the most beloved movie stars in south India , died Wednesday, news reports said. He was 77 years old. Kumar died in a Bangalore hospital of cardiac arrest, his personal physician, Dr. Ramana Rao, told the Press Trust of India news agency. 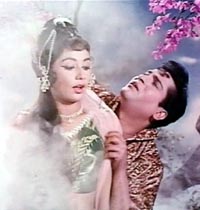 Kumar, whose name was also spelled Rajkumar, appeared in more than 200 Kannada-language films over five decades, becoming one of the most famous faces in south India , and a man with millions of fiercely devoted fans. While he largely gave up acting in the mid 1990s, he remained one of the region's best-loved figures. Though he played rugged, masculine heroes who triumphed over scheming villains in many of his movies, he was also known for never having smoked cigarettes on screen, or played a drunkard after his early days.

He shot again to prominence in 2000, when he was kidnapped by Veerappan, a famed bandit who had spent decades eluding police in the forests of south India . Kumar was freed by Veerappan after spending 109 days living in the forests with his gang. Local reports had long said a large ransom had been paid for his release, though Kumar denied that.

Kumar won more than 20 national and state awards for his contribution to Indian cinema. His fan following was frenetic they called him "Annavaru" meaning "respected elder brother" in the Kannada language. Movie reviews in local newspapers often told of audiences in cinema halls booing villains who attempted to pick fights with him on the big screen. Fans were known to worship his image and pray that his films would be successful at the box office.

He was well-known as a singer and his range extended from dance numbers to classical and devotional songs. He acted in action films, mythological sagas and romance movies in which he was the star attraction. Riding on his popularity, Kumar's three sons Shivraj, Raghavendra and Puneet all became successful actors.

After his retirement, Kumar continued to work behind the scenes as a producer. His first glimpse into the world of acting was as a child, when he accompanied his father, an actor who performed in plays in small Indian villages. Kumar soon dropped out of school, first to act on the stage and later in the movies. The government of southern India 's Karnataka state called an emergency meeting Wednesday to pay homage to the actor. The government has also decided a state funeral will be accorded to Kumar, according to Press Trust of India, reports the AP.