The ruling party of outgoing Prime Minister Thaksin Shinawatra received 56 percent of the vote in last week's heated national election that followed months of protests demanding he resign, the Election Committee announced Wednesday. Thaksin dissolved Parliament in February and called a snap election in an effort to renew his mandate, but opposition parties boycotted the April 2 polls, leaving Thaksin's Thai Rak Thai party as the only major player in the ballot. Thaksin opponents urged Thais to "vote for no vote," or cast an abstention ballot. 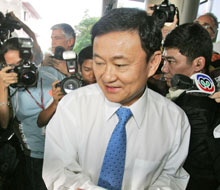 According to the Election Commission's official results released Wednesday, Thai Rak Thai or Thai Love Thai received 16,420,755 votes, down from 19 million votes in the previous election last year. A record number of abstentions 9,051,706 ballots for "no vote" accounted for 31 percent of votes. Last year, only 1.11 percent cast abstentions.

Despite winning the majority vote, Thaksin announced last week he would not take up the prime ministerial post. Thaksin named his longtime friend and deputy prime minister, Chitchai Wannasathit, to serve as acting leader until a new government can be formed.

Although results were released Wednesday, the election remains in dispute with by-elections scheduled Sunday in 40 constituencies, including 38 in which the candidate received less than the mandatory minimum of 20 percent of the vote. One constituency had no candidates because the sole runner was disqualified before the election, and another had results that the Election Commission did not approve because of a discrepancy between the number of registered voters and ballots cast. Unofficial results show that Thai Rak Thai has won 459 out of 500 seats of Parliament, while another seat went to a small party called Khonkoplodnee.

Legal experts say that without all 500 seats being filled within the legally required 30-day time limit after the election, the Parliament will not be able to convene. This would stall the formation of a new government, reports the AP.