The German government on Wednesday labeled Iran 's claim to have enriched uranium "another step in the wrong direction" and urged Tehran to accept international demands for it to halt all enrichment activity. Iran 's president announced Tuesday the country had succeeded in enriching uranium on a small scale for the first time, using 164 centrifuges. Britain and the United States swiftly condemned the statement. 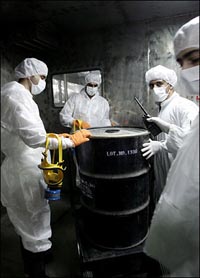 Foreign Ministry spokesman Martin Jaeger said German officials are hoping a report from Mohamed ElBaradei, the head of the U.N.'s nuclear watchdog agency, will help clarify the situation. Germany along with France and Britain has led long-running European diplomatic efforts to address concern about Iran 's nuclear program. Tehran says the program is for peaceful purposes, but there are concerns that Iran is seeking to make weapons.

Jaeger said Germany still hopes the leadership in Tehran will indicate that it is ready to return to negotiations. "We appeal with great earnestness for the leadership of Iran to again give us such a signal," Jaeger said, reports the AP.