Denmark has reopened its embassy in Syria , two months after an angry mob burned the building to protest caricatures of Islam's Prophet Muhammad that were published in a Danish newspaper. The embassy reopened Tuesday, but tensions persist, Ambassador Ole Egberg Mikkelsen said. 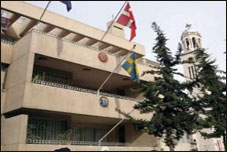 "Everybody has an opinion about the cartoons, everybody has an opinion on Denmark ," Egberg Mikkelsen told Denmark 's public radio. Islamic law forbids any depictions of the Prophet Muhammad, even positive ones, to prevent idolatry. One of the cartoons, which were first published by the Jyllands-Posten newspaper in September, showed the prophet wearing a turban shaped like a bomb with a burning fuse.

The caricatures were republished in several European and New Zealand newspapers as a statement on behalf of a free press, provoking deep anger among many Muslims. Denmark also closed its diplomatic missions in Pakistan , Indonesia , Iran and Lebanon because of the violent protests, but they have since reopened, reports the AP.