The U.S. dollar fell in Asia on Wednesday on global uncertainties set off by an announcement from Iran that it has successfully enriched uranium for the first time. 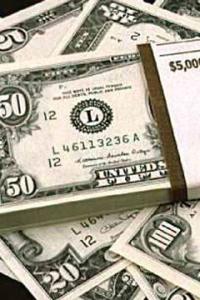 The dollar generally declines on tensions over Iran's nuclear program because investors tend to put their money into the Swiss franc and gold instead of U.S. assets, traders said. A standoff with Iran may also cause oil prices to rise, which could damage the U.S. economy, they said.

Iranian President Mahmoud Ahmadinejad said Tuesday that the country "has joined the club of nuclear countries" by successfully enriching uranium for the first time, a key process in what Iran maintains is a peaceful energy program.

The U.N. Security Council has demanded that Iran stop all enrichment by April 28 because of suspicions the program is designed to make nuclear weapons. The U.S. and Europe are pressing for sanctions against Iran if it fails to comply.

Expectations that data to be released later in the week will show the U.S. trade deficit near a record high also sent the dollar falling. U.S. investment banks, Japanese mutual funds and Japanese exporters sold the dollar for yen. The euro also rose against the dollar.

"The dollar has been rallying against major currencies since last Friday after good U.S. employment data, so this news is a good reason for people who want to take profits or short the dollar," he said.

Ogasawara said the dollar could fall to 117 yen and the euro rise to US$1.23, but when that may happen would depend on how quickly tensions over Iran's nuclear ambitions escalate, reports the AP.