A barrage of diplomatic meetings in Japan have failed to win a commitment from North Korea to return to the stalled six-party talks on dismantling its nuclear weapons program, officials said Wednesday. Representatives from the six nations the United States, China, Russia, Japan and the two Koreas held a series of meetings on the sidelines of an academic conference in Tokyo in hopes of reviving the nuclear negotiations. 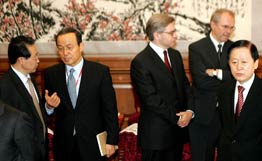 But as delegates prepared to leave Tokyo on Wednesday, some officials said the North Koreans still refused to rejoin the talks to protest U.S. sanctions imposed on North Korean companies for alleged financial crimes. Chinese chief negotiator Wu Dawei told reporters before returning to Beijing that there was no possibility of a resumption of the six-party talks by the end of April, saying the sanction issue was the chief stumbling block.

"We'll continue to make efforts," Wu said. "At the moment, our prospects are still unclear." U.S. Assistant Secretary of State Christopher Hill met with counterparts from Japan and South Korea on Wednesday morning, and said that the five nations urging North Korea back to the talks were forming a common strategy.

Hill, who was expected to head to Seoul later in the day, said the decision was now up to North Korea . "I don't think it's up to us to get the DPRK back to the talks," he said, using the country's official name, the Democratic People's Republic of Korea . South Korean chief negotiator Chun Young-woo, who also left Tokyo on Wednesday, said that the North Korea 's linkage of the U.S. financial sanctions to the nuclear talks was not in Pyongyang 's best interest.

" North Korea 's position has not changed," Chun conceded. Speculation had been high that Hill would meet with the North Korean delegate, Kim Kye Gwan, but such an official meeting never materialized. The two had a brief encounter on Tuesday, said Chun, but it was not a full meeting.

Hill reiterated on Wednesday that he was not in Tokyo to meet with the North Koreans, and Chun also said that such a meeting later in the day was unlikely. North Korea has refused to restart the talks unless the financial restrictions imposed on a Macau bank and North Korean companies are lifted, but Washington maintains the sanctions are unrelated to the nuclear talks and will stay in place.

Hill on Tuesday said that the U.S. had frozen some US$24 million of the impoverished nation's holdings. The sanctions were imposed to counter alleged counterfeiting and other wrongdoing. This week's security meetings had raised hopes about the possibility of restarting talks that have been stalled since last year on ending North Korea 's nuclear program in exchange for aid. Pyongyang has boycotted the six-party nuclear talks since November.

Meanwhile, Hill described his Tuesday morning meeting with China 's Wu Dawei as "very excellent" and said Beijing was committed to resolving the standoff through dialogue. Chun told reporters after meeting with Hill on Tuesday that North Korea seems to be considering talks, but that "it is difficult to say at this point whether it will lead to a resumption."

After arriving at Gimpo International Airport in Seoul later Wednesday, Chun told reporters that " North Korea is insisting that it won't return to the talks unless it withdraws its money from its (frozen) accounts. We have to see if the North will stick to that position or reconsider it based on the outcome of contacts with the representatives of other countries." North Korea 's Kim later held a meeting with the Japanese and said the two sides discussed "how to break the nuclear deadlock," but declined to give any details, reports the AP.