Thailand 's outgoing prime minister has reportedly requested meetings with several European leaders and U.S. President George W. Bush, raising questions about his motives after he resigned to calm anti-government protests. The Nation newspaper reported Wednesday that outgoing Prime Minister Thaksin Shinawatra met with the ambassadors of Britain , France and the United States to ask for meetings with Prime Minister Tony Blair, President Jacques Chirac and Bush during a trip through those countries later this month. 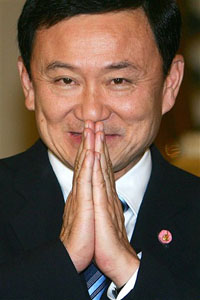 The British Embassy said the request was under consideration. Opposition politicians took the news as another sign that Thaksin was plotting a comeback and keen on maintaining a high-profile despite appointing a caretaker prime minister to take his place after controversial general elections April 2.

"This is inappropriate. We're still in a transitional period," said Surin Pitsuwan, deputy leader of the opposition Democrat Party, adding that Thaksin hoped to use the meetings to maintain a visible role during his hiatus. "He wants to show that he still has a high profile and connections." Thaksin is planning to vacation in England later this week ahead of a multi-country tour, said Foreign Ministry spokesman Kitti Wasinond, calling the trip a private visit. He declined to discuss details of the itinerary, saying only the tour might include a stop in the United States .

Following months of street protests and an opposition boycott of the election, Thaksin announced last Tuesday that he was taking a break from politics pending the convening of Parliament and the formation of a new government. Thaksin called his hiatus a "rest" that was necessary to restore unity in the country after protests that prompted Thailand 's worst political crisis in over a decade. One indication of Thaksin's future intentions came Tuesday, when a Cabinet member vowed he would be back in power within a year.

"We believe that within one year he will return as prime minister," Deputy Prime Minister Suriya Jungrungreangkit said at Thai Rak Thai party headquarters. Suriya is also the party's secretary-general. It was not immediately clear if Thaksin's request to meet leaders during his overseas tour would be accepted. A British Embassy spokesman, Ian Pround, said the matter was under discussion.

"We're still talking about it with Thaksin's office and with London," he said, adding that Thaksin met on his request with British Ambassador David Fall on Friday to "give us a flavor of what his short term plans were." Also Friday, Thaksin met with the ambassadors of France and the United States . Embassy officials said the talks focused on Thaksin's travel plans, declining to elaborate, reports the AP.