Russia 's Foreign Ministry on Wednesday criticized Iran after its president said Tehran had successfully enriched uranium for the first time, a potential step toward developing nuclear weapons, the ITAR-Tass news agency reported. "We believe that this step is wrong. It goes in contradiction to decisions of the IAEA (the U.N. nuclear watchdog) and resolutions of the U.N. Security Council," Foreign Ministry spokesman Mikhail Kamynin was quoted as saying by ITAR-Tass. 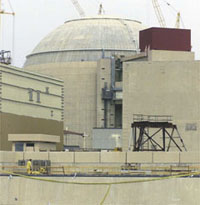 The official added that Russia , which has close ties with Tehran , had learned "with concern" of the Iranian announcement. The announcement from President Mahmoud Ahmadinejad was certain to heighten international tensions surrounding Iran 's nuclear program, which Tehran maintains is a peaceful energy program. The U.N. Security Council has demanded that Iran stop all enrichment by April 28 because of suspicions the program is designed to make nuclear weapons. The United States and the European Union are pressing for the U.N. to impose sanctions on Iran, but its close commercial partners Russia and China both veto-wielding permanent members of the U.N. Security Council have opposed such a step, reports the AP.