Police arrested 29 journalists who were protesting in Katmandu to demand an end to a crackdown on the media by the government, which has detained scores of journalists during pro-democracy protests in recent days. Some 100 journalists had gathered for the rally organized by the Nepalese Federation of Journalists when police moved in and began making arrests because the demonstration was being held in a part of Katmandu that has been declared off-limits to protests. 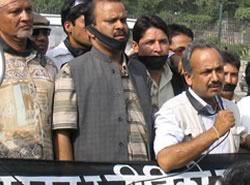 More than 100 other journalists have been arrested since the latest wave of protests against King Gyanendra began on April 5. However, all have since been released. Gyanendra seized control over the government 14 months ago, saying he needed to stamp out political corruption and end a communist insrugency that has left nearly 13,000 people dead in the past decade.

The royal government has since imposed severe restrictions on journalists and introduced new media laws. Criticism of the king, the government and security forces has been banned. The government also has prohibited independent reporting on the country's communist insurgency, imposing a maximum penalty of two years in prison and a fine of 500,000 rupees (US$7,000; Ђ 5,800) on journalists and newspapers that violate the ban.

Wednesday's arrests came hours before a seven-party opposition alliance, which has been organizing the protests that have gripped Nepal in recent days, was to hold a rally in central Katmandu . While the government has imposed daytime curfews in Katmandu since Saturday to head off such demonstrations in the center of the capital, no curfew had been announced by mid-morning Wednesday, reports the AP.