Thousands of shoppers thronged the opening of IKEA's biggest Asian store in Beijing on Wednesday as the Swedish furnishings maker launched a bid to expand its share of China 's thriving home improvement market. The store IKEA's biggest after its Stockholm flagship is part of a wave of expansion by retailers, both Chinese and foreign, that want to cash in on a boom in home ownership. 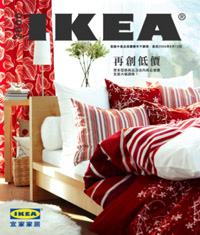 Traditional Peking opera dancers performed outside the new IKEA outlet and crowds were held back by metal barricades before the opening. Inside, the scene was low-key, with shoppers strolling down wide aisles and looking at furniture and kitchen wares. It was a striking contrast to opening day in 1999 for IKEA's first Beijing outlet, when customers jammed the smaller store.

Another woman who would only give her surname, Zhao, was looking at model kitchens with her daughter and granddaughter. "This is really new. We should pay attention to new things," Zhao said. "The old concept was that our kitchens were tidy. That was OK," she said. "But the new idea is that they can be convenient and look good", reports the AP.