Queen Elizabeth II was due to see grandson Prince Harry, the third in line to the British throne, receive his military commission Wednesday during a graduation parade at Sandhurst military academy. Harry, 21, began training at the Royal Military Academy last May to become an army officer in the Blues and Royals regiment of the Household Cavalry, one of the British army's oldest units. 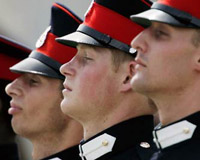 He will be eligible for future military service in Iraq or Afghanistan and has spoken of his determination to take a place on the front line alongside his colleagues if called. The Duke of Edinburgh, Prince Charles, the Duchess of Cornwall and Prince William will also attend the ceremony at the academy in southern England .

Harry's girlfriend, Chelsy Davy, arrived at London's Heathrow Airport on Tuesday, but will not be attending the parade, said a Buckingham Palace spokesman. The spokesman declined to comment on reports Davy would attend a graduation ball with the Prince later Wednesday, reports the AP.