A truck carrying police was hit by an anti-personnel mine in northeastern Sri Lanka on Wednesday, and at least two officers were killed, the area's police chief said. 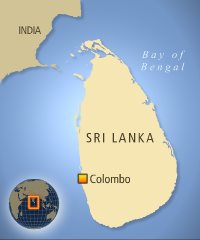 At least four policemen were in the truck when it was hit by the blast in Trincomalee, he said. The two others were wounded, Abeywardana said.

The blast was caused by a claymore mine, which can be detonated by remote control, he said.

The attack came a day after a similar explosion by a bus carrying navy sailors near Trincomalee killed at least 11 military personnel and injured 11 other people, including two British tourists, reports the AP.