Ukrainian President Viktor Yushchenko met on Tuesday with leaders of parties which won parliamentary seats in last's month election, calling on all to work together for the country's interests. The March 26 parliamentary vote failed to give any party a majority and forced the country's top lawmakers into uneasy talks to put together a coalition. 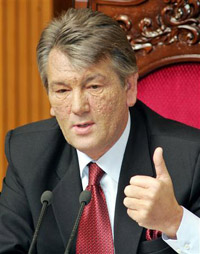 According to the final results announced Monday, the pro-Russian Party of the Regions will have the biggest parliamentary faction after winning 32.14 percent of the vote, followed by the now-divided Orange Revolution team. The party of former Prime Minister Yulia Tymoshenko, who had a bitter falling out with Yushchenko last autumn, came in second with 22.29 percent, and the president's Our Ukraine party finished third with 13.95 percent.

The Socialists, who also supported the 2004 Orange Revolution mass protests against a presidential election that year deemed fraudulent, and the Communists also won enough votes to gain parliamentary seats. Yushchenko congratulated party leaders on the results, expressing the hope "that political quarrels will end and national interest will become a priority," according to his spokeswoman, Irina Gerashchenko.

"It is very good that only five forces made it into parliament, because it will lead to a more constructive dialogue and closer ties between parliament and the president," Yushchenko was quoted as saying. Gerashchenko said that "the president will work with the majority as well as with the opposition."

At their meeting, Yushchenko and the party leaders were likely to discuss plans for building a governing coalition, which needs to be formed within 30 days after the new parliament convenes. The pro-presidential Our Ukraine party has been holding talks with its former Orange allies Bloc Yulia Tymoshenko and the Socialists. The parties have decided to come up with a draft coalition agreement in the coming days.

But Yushchenko and other senior Our Ukraine officials have also indicated that the party could also reach out to Party of the Regions, which carries the Russian-speaking east and south of the country. They have said such an alliance could help unite Ukraine. "The president wants to hear the opinions of political leaders of the forces that won the parliamentary election regarding future work and the future coalition," Gerashchenko said, reports the AP.