The death toll from a devastating blaze at a trade fair in northern India rose Tuesday to 52, officials said, as anger mounted against the local government. At least 200 people were injured by the flames or trampled as fire swept through giant exhibition tents at a consumer electronics show Monday in the dusty rural town of Meerut, about 400 kilometers (250 miles) from the Lucknow, the capital of the Uttar Pradesh state. 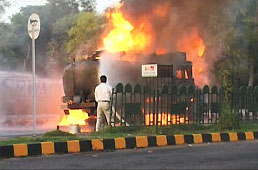 Angry crowds gathered at the scene of the inferno Tuesday forcing Uttar Pradesh Chief Minister Mulayam Singh Yadav to cut short his visit to the site. Several hundred people blocked his vehicle, demanding increased compensation and that those responsible for the fire be brought to justice.

Police had issued arrest warrants for the organizers of the fair who had disappeared, the Press Trust of India news agency reported. Sonia Gandhi, the head of the ruling coalition also traveled to Meerut early Tuesday, inspecting the site of the blaze and visiting wounded people in a local hospital.

Witnesses described a horrific scene, with screaming injured people, three enormous tents destroyed, and rescuers pulling out corpse after corpse. At least 22 ambulances ferried the injured to hospitals in the area, officials said. "Dead bodies are strewn around, most of them are charred beyond recognition. The bodies were dumped into trucks, jeeps and ambulances and taken away from the public glare," said Prakash Arya, a witness reached at the scene on his mobile phone.

Authorities said most of the corpses were found near the exits. "Apparently some people were knocked down and crushed in the stampede as they rushed to get out of the inferno," said Rajiv Sabharwal, senior police superintendent for the town.

"I ran for my life," said Mahendra Singh, a shop owner who escaped with minor burns. It wasn't clear what caused the blaze, though a local politician, Laxmikant Bajpai, told Headlines Today TV station it may have started when plastic sheeting hanging over an air-conditioning unit caught fire.

Other officials said the fire may have been sparked by a short circuit. Several people died overnight from their wounds. "The toll has gone up to 52," R.M. Srivastava, a senior official in the state Home Ministry, said Tuesday. "The fire has been put out but the police are still searching for dead bodies in the rubble."

While police scoured the ruins, desperate relatives went from hospital to hospital, looking for missing relatives. "Some of them have come to the mortuary also, but are unable to identify the bodies," said Pushapati Srivastava, a local official.

Television footage showed dozens of people standing outside the mortuary holding pictures of friends and relatives. Trade fairs, where manufacturers and traders set up stalls to exhibit their wares to consumers and other businesses, are common in India . They are normally held in elaborate cloth tents set up over interconnected bamboo poles and often with little regard for safety regulations. This was the first large-scale fair to be held in Meerut , reports the AP.