Former U.S. President Bill Clinton called on the Democratic Party to find common ground with Christian voters and noted that evangelical leaders are becoming more interested in issues like climate change and AIDS prevention. The former president spoke Monday night at a party fundraiser in New York along with his former vice president, Al Gore. 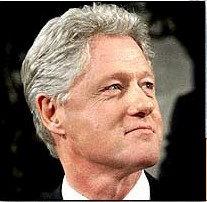 In recent weeks, Clinton and other party leaders have sought to frame Democratic concerns in religious language, and at Monday's appearance Clinton invoked scripture to get his point across.

Mentioning the coming Easter Sunday holiday, he reminded the crowd that Democrats stand for one of the hallmarks of the New Testament helping the poor. "That's mentioned more than 500 times," Clinton said. "You can't find all that stuff (Republicans) talk about any more than two or three times, if at all." Speaking to the 500 donors who'd paid at least $1,000 ( Ђ 800) to attend the dinner, Clinton urged the group to think of themselves as "values voters" whose concerns mirror those of most Americans.

"We don't have to be afraid of our values," Clinton said, outlining a message he said Democrats need to convey when asked by skeptical voters what they stand for. "We believe in ... shared opportunities, shared responsibilities and shared participation in the community," he said.

Clinton said Republicans "believe in concentrated wealth and power and using ideology to divide people." Gore warned of the looming calamity of climate change and called on the crowd of donors to use their "moral imagination" to address the threat of global warming.

He estimated that only 10 years remain to make the global changes necessary to thwart a potential environmental catastrophe. Gore, who narrowly lost the 2000 presidential election to Republican George W. Bush, did not cast his argument in partisan terms. "Democrats need to push a political consensus," he said. Officials in the Bush administration have questioned the science surrounding climate change, saying the matter needs further study, reports the AP.