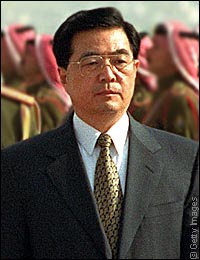 It was the first time the ministry has released Hu's full itinerary for Hu's trip. "He will exchange views with President Bush on bilateral ties, plus regional and international issues of common interest," Liu said at a regular briefing. It will Hu's first an official visit to the United States since becoming president in 2003. He had planned a visit last September but postponed it after Hurricane Katrina battered the Gulf Coast , reports the AP.