Greenpeace on Friday delayed the docking of a ship at Amsterdam harbor that it said was carrying a cargo of soya grown in illegally deforested areas of the Amazon for processing for European fast food restaurants. A spokeswoman for the environmental group said police detained five activists from inflatable rafts maneuvering between the quay and the cargo ship, identified as the Liberian-flagged W1. 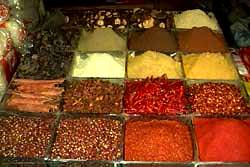 The operation was part of a campaign launched against Cargill Inc., which Greenpeace says is supplied from illegal soya fields in the Amazon, and against the fast food chains McDonald's and KFC, which buy the soya as feed for chickens used in their products. Cargill said it was working with Brazilian farmers "to minimize negative impacts of soy production" while boosting the economy of an underdeveloped region. "We are helping our direct farm customers to develop and implement best agricultural and environmental management practices," it said in a statement.

Laura Westendorp, spokeswoman for the Amsterdam-based Greenpeace said the 225-meter (740-foot) ship was loaded at Santarem , a harbor in the soya growing region of the Amazon. "Our protest also is against Cargill, but mostly against the destruction of the forest for soya," she said.

The activists ended their action after blocking the ship for more than four hours. Westendorp said Cargill's management in the Dutch capital invited Greenpeace leaders to a meeting to discuss the issue. Greenpeace published a report Thursday, entitled "Eating up the Amazon," which it said traced soya from illegally cleared Amazon rain forests "through the ports, processors and meat producers of Europe , and finally into the Chicken McNuggets sold under the golden arches across the continent."

In its statement, Cargill, a U.S.-based global food corporation, acknowledged that environmental violations occur in Brazil . "We are committed to encouraging sustainable business practices in areas surrounding our direct operations, (but) we alone cannot ensure sustainable soy development throughout Brazil ," it said. Keith Kenny, senior director of quality assurance for McDonald's Europe , said in an e-mail on Thursday that the company would investigate Greenpeace's claims and study the report.

As it was being published Thursday, Greenpeace activists plastered many McDonald's restaurants in Britain with posters of Ronald McDonald wielding a chain saw. Dozens of activists in chicken costumes also invade McDonald's restaurants, chaining themselves to the chairs. Soybean production in the Amazon has skyrocketed in recent years thanks to growing international demand and the development, by Brazilian-government labs, of a type of soybean that can grow in the region's poor soil and punishing sun.

Environmentalists say that soybeans' success has driven up the value of cleared jungle. Greenpeace says strict environmental regulations require landowners to keep 80 percent of their forested areas standing, but these regulations are often ignored, reports the AP.