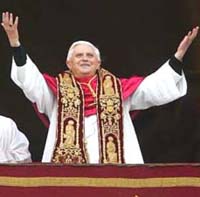 Peres, a senior member of Olmert's centrist Kadima party, was also scheduled to meet with Vatican secretary of state Cardinal Angelo Sodano, said the Israeli Embassy to the Holy See.

Benedict has been following in the footsteps of his predecessor, Pope John Paul II, in trying to improve Jewish-Catholic relations. John Paul visited Israel and the Palestinian territories in 2000.

The invitation for Benedict to visit Israel first came in a July letter to the pope by Ariel Sharon, the Israeli prime minister who suffered a massive stroke. It was later repeated during Benedict's meetings at the Vatican last year with President Moshe Katsav and Israel's two chief rabbis, the AP reports.