Israel and Turkey have suspended what was meant to be a breakthrough deal: shipping water in huge tankers from Turkey to the parched Holy Land . Both governments have concluded the deal is not feasible, but hope to revive it in the future. 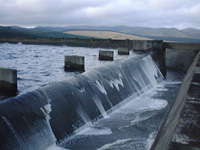 Under the 20-year agreement, signed two years ago, Turkey was to ship 50 million cubic meters (1.75 billion cubic feet) of water annually from its Manavgat River . The deal was to alleviate Israel 's chronic water shortage and cement its relations with an important Muslim ally. Turkey was to boost its position as a regional power.

Israeli Foreign Ministry spokesman Mark Regev said recently that the agreement was put on hold because high oil prices had made it impractical to ship the water in large tankers. Privatization of Turkey 's Manavgat water-treatment facility also contributed to the higher costs, he said. Regev said the two countries would continue looking at other options, including building a water pipeline.

The decision to suspend the project was not connected to the recent visit of Hamas leaders to Turkey , he added. "The political relationship with Turkey is good," he said. In Ankara , officials at the Turkish Foreign Ministry confirmed the project is now on hold and that the idea of a pipeline would be explored.

But experts say it could be years for a pipeline to materialize. In addition to cost considerations, such a project would possibly require involvement of Lebanon or Syria , Arab countries that are hostile to Israel . Water experts said the deal would have provided only a small percentage of Israel 's water needs. Critics have said the plan, going back more than five years, was motivated more by politics than economics.

"From the time of the first bids, it was clear you could not bring water of drinking quality from Turkey at an affordable price," said Shaul Arlosoroff, a water expert and member of the board of Mekorot , Israel 's national water carrier. "There were other reasons for Israel to maintain connections and dialogue with Turkey . The issue of economics was not the decisive issue," he said.

Arlosoroff said the chances of building a pipeline deal are very low, especially now that Israel has opened a new desalination plant in the port city of Ashkelon with a second plant in the works. Israel also has reduced its water needs through expertise in drip irrigation and recycling waste water for agricultural use. "I wouldn't buy stock in the company that has to bring water from Turkey to Israel ," he said, reports the AP.