Suspected Kurdish rebels have killed five Turkish soldiers in fighting in a mountainous area of southeastern Turkey , a television report said Wednesday. The five were killed in fighting with suspected guerillas from the Kurdistan Workers' Party, or PKK, in the Gabar mountains in Sirnak province, close to the borders of Syria and Iraq , NTV television said. 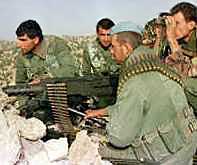 Officials could not immediately be reached for comment. Earlier, a Turkish policeman seriously wounded in a gun attack by suspected PKK rebels died in a hospital in southeastern Turkey , the hospital said. Policeman Cihan Bayik, 33, was standing watch late Tuesday outside the police station in the town of Genc , in Bingol province, when suspected rebels opened fire, Gov. Vehbi Avuc said.

He died early Wednesday, the hospital in nearby Elazig said. The attacks follow a week of Kurdish rioting that spread from southeastern Turkey to Istanbul in the west and left 15 people dead. The riots started after the funerals of four PKK guerrillas late last month.

Twenty-one Kurdish rebels have been killed in recent clashes between the PKK and the military. Fighting with the guerrillas has left 37,000 dead since 1984. The fighting largely ended after the 1999 capture of guerrilla leader Abdullah Ocalan, but began to flare up after the guerrillas declared an end to their unilateral cease-fire in 2004. The group is considered a terrorist organization by Turkey , the U.S. and the European Union.