Informal talks on Kosovo between US, Russia, EU countries

Diplomats from the United States , Russia , the Balkans and six European Union countries held informal talks Wednesday on the future status of Kosovo. The one-day meeting at a seaside resort near Athens was closed to the media. But Greece 's deputy foreign minister said the talks were aimed making sure concerns felt in Kosovo and its neighbors were better understood. 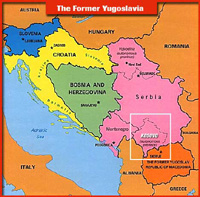 Informal talks on Kosovo between US, Russia, EU countries

"We must reach solutions that are mutually acceptable and not imposed from the outside," Yiannis Valinakis said. "It's very important the voice of the region is heard by those who are playing a lead role in determining (Kosovo's) future status ... We as neighbors have a better understanding of the sensitive sides of the issues."

Due to attend the meeting are Kosovo's top U.N. official Soren Jessen-Petersen, special U.N. envoy Albert Rohan and Rosemary DiCarlo, deputy assistant secretary at the U.S. State Department's Bureau of European and Eurasian Affairs. DiCarlo is part of the so-called Contact Group on Kosovo, also made up by Britain , Germany , France , Italy and Russia .

Diplomats from Austria were also present, as well as from Greece and 10 southeast European countries: Romania , Bulgaria , Serbia-Montenegro , Moldova , Macedonia , Croatia , Turkey , Bosnia and Albania . Athens in the past has opposed independence for Kosovo, fearing a change in Balkan borders could hurt regional stability.

"We are trying to transform the Balkans once known as the powder keg of Europe into a European neighborhood. We must all contribute to the stabilization of the region, and that includes determining the final status of Kosovo," Valinakis said.

The Contact Group has agreed already on a set of guidelines for Kosovo's future. They say the U.N.-run province cannot return to its previous status under direct Serb rule, nor can it be partitioned along ethnic lines or be joined to another country in the region, such as Albania . They also stipulate that any agreement should be acceptable to the province's ethnic Albanians, reports the AP.