An EU delegation was to resume talks Wednesday to discuss preparing Serbia for eventual membership, after the bloc recently gave Belgrade one more month to arrest top war crimes suspect Gen. Ratko Mladic. The mostly technical, expert-level negotiations, which concer reforms and regulations Serbia must meet before it can be considered for EU membership, are being held despite the looming threat of that any talks may be suspended if the Balkan country fails to extradite the Bosnian Serb wanted for major wartime atrocities. 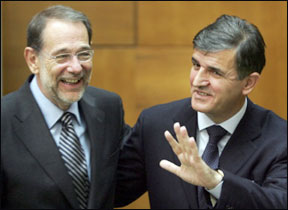 Last week, Brussels extended the previous, end-of-March deadline for Mladic's arrest, after Serbia 's Prime Minister Vojislav Kostunica promised to capture the fugitive and hand him over to the Netherlands-based U.N. war crimes court by the end of April. The decision opened way for the third round of talks on the so-called Stabilization and Association Agreement with Serbia a stepping stone to possible membership in the bloc.

Mladic's indictment includes his alleged responsibility for the 1995 massacre of up to 8,000 Muslims in Srebrenica in eastern Bosnia . U.N. war crimes prosecutors insist that he is hiding in Serbia , although authorities here claim they cannot locate the elusive ex-commander.

Bringing Mladic to justice has become the obstacle for closer ties between Belgrade and Brussels , which have steadily improved since the 2000 ouster of former strongman, Slobodan Milosevic. The post-Milosevic leadership has extradited Milosevic and more than two dozen other indicted Serbs to the U.N. war crimes court, but Mladic and a few more are still being sought. Meanwhile, the talks in Belgrade are to focus on Serbia 's labor regulations and a free flow of goods and services. The EU delegation is headed by enlargement commission official Reinhardt Priebe, reports the AP.