South Korea 's foreign minister said Wednesday he will visit six European countries, including a stop in Russia to talk about the stalled nuclear disarmament talks with North Korea . During his visit to Moscow a participant in the international talks on North Korea's nuclear weapons program Ban Ki-moon said he will "hold an in-depth discussion on ways to cooperate" for resumption of the arms negotiations. 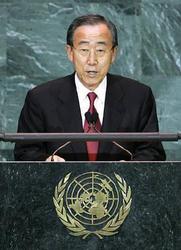 The six-party disarmament talks, which also include the two Koreas, China, Japan and the United States, have been on hold since November due to the latest dispute between Pyongyang and Washington over U.S. restrictions against the communist nation for alleged illicit activities like money laundering and counterfeiting.

Ban will begin his tour of Europe on Thursday, which will take him to Austria , Denmark , Greece , Slovakia and the Vatican . At the Vatican , Ban said he will deliver an invitation from South Korean President Roh Moo-hyun for the pope to visit South Korea . Ban has also been traveling recently as part of his campaign for the position of U.N. secretary-general. Incumbent Kofi Annan's five-year term expires at the end of the year, reports the AP.