Police detained dozens of opposition politicians Wednesday in a crackdown in Katmandu to thwart a planned general strike this week, while rebels killed six security troops in an ambush in Nepal 's southeast, officials and activists said. Police also detained 50 pro-democracy activists who defied a ban on rallies in the capital to gather and express their support for the planned four-day strike starting Thursday, aimed at pressing King Gyanendra to restore democracy more than a year after he seized control of the government. 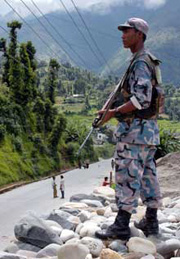 Maoist guerrillas, who have expressed support for the political parties' strike, continued attacks against the security forces. Suspected rebels opened fire at security forces during an ambush in Durgapur village, 500 kilometers (310 miles) southeast of Katmandu , killing five soldiers and a policeman, Bhola Siwakoti, the region's chief administrator, said by telephone. Four other soldiers were wounded.

The rebel chief Prachanda has promised not to carry out any attack in the capital this week, a pledge political activists say undermines the governments claim that it needs to crack down on protests in Katmandu to stop would-be communist infiltrators from launching terror attacks. But the government has dismissed the rebel pledge, and said that the political protests will be crushed, with force if necessary. The country's alliance of seven major political parties have planned rallies in the capital this week in addition to their call for a nationwide general strike.

"This is state terrorism, but we will not be scared by the crackdown," said Prakash Man Singh of the Nepali Congress Democratic party. The raids on the homes of political organizers were launched early Wednesday in hopes of heading off this week's rallies and general strike, a top government official said, speaking on condition of anonymity because he was not authorized to speak to the media.

Singh, of the Nepali Congress Democratic party, said authorities targeted key organizers of the protests, and that more than two dozen members of the party were detained, he said.

Khadga Prasad Oli of the Communist Party of Nepal said three senior leaders of the party were taken by police, while a dozen members were also detained.

Also Wednesday, police detained a group of 50 lawyers, journalists, teachers and doctors who gathered in Katmandu to back the general strike. The group had marched about 50 meters (160 feet) in defiance of the ban. Police in riot gear quickly moved in and stopped them. The detained activists were taken to police stations, but it was not immediately clear how long they would be held.

Gyanendra sacked an interim government and seized direct control over the government over a year ago. Besides cracking down on activists and politicians, the government also has restricted road transport in a bid to prevent this week's protests, reports the AP.