Myanmar has signed an agreement with a Thai company to build a hydropower plant on Southeast Asia's longest free-flowing river, the Salween, state-run media reported Tuesday. 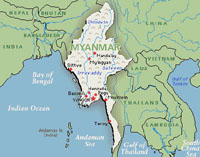 The Ta Sang hydropower plant is one of several dam projects planned for construction on the river, known as Thanlwin in Myanmar. It is expected to be completed within 15 years, the New Light of Myanmar newspaper reported.

The plan to dam the Salween has drawn strong protests from environmental groups who claim they will degrade one of the region's most biodiverse areas, which has been designated a UNESCO World Heritage Site.

Opponents of Myanmar's ruling junta say the dam construction will likely involve forced labor. When the dams are built and surrounding land flooded, it could also lead to ethnic minority groups, who have long been suppressed by central government, being driven from their villages.

The government signed a US$6 billion agreement ( Ђ 5 billion) with Thailand's MDX Group to build the 7,110-megawatt plant located about 480 kilometers (300 miles) northeast of the capital Yangon, the newspaper reported.

After completion, most of the electricity generated from the hydropower plant will be sold to Thailand, while Myanmar will be supplied with an unspecified amount of free power, it said.

Myanmar faces constant power shortages, with many parts of the country suffering frequent outages because electricity supply has been unable to keep up with rising demand, reports the AP.