Denmark 's Prime Minister Anders Fogh Rasmussen will travel to Greenland later this month to meet officials from the semiautonomous government, visit a U.S. air force base and go on a dogsled trek with a Danish navy unit, his office said Tuesday. The vast Arctic island, populated mostly by Inuits, was granted sovereignty over its domestic affairs from Denmark in 1979, but Copenhagen still controls defense and foreign policy. 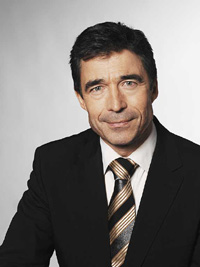 Fogh Rasmussen will meet with Greenland Premier Hans Enoksen in Qaanaaq, 1,000 kilometers (680 miles) south of the North Pole. The Danish leader will also visit the nearby U.S. Air Force Base in Thule , his office said. Afterward, the 53-year-old prime minister will embark on a two-day dogsled journey along the northwestern coast with an elite navy unit. The unit, created in 1950, has a permanent staff of 12 troops with 80 dogs and six sleds. It patrols a vast region of uninhabited frozen wilderness, traveling an average of 4,000 kilometers (2,500 miles) yearly by dog sled, reports the AP.