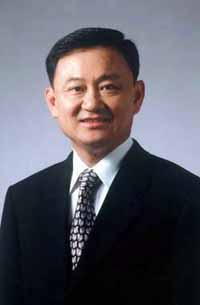 Leaders of the anti-Thaksin movement said they would resume street protests in Bangkok on Friday, which were put on hold during the election, if Thaksin refuses to step down.

"The day the prime minister publicly and officially announces his resignation will be the day we stop protests," said Suriyasai Katasila, a spokesman for the People's Alliance for Democracy, which has been leading the protests. He read from an open letter intended for the prime minister.

Thaksin said late Monday that he had won 57 percent of votes, according to preliminary results, but that he would address his opponents' accusations of corruption and abuse of power by letting an independent committee decide whether he should step down.

"I want to set up an independent committee to bring together all those with different opinions to find a way forward. If that committee tells me to quit, then I will quit," Thaksin said, speaking live on prime-time television in his first substantive comments since Sunday's election.

The Election Commission was initially expected to release complete poll returns Tuesday but it has said there could be a delay. By Tuesday morning, counting had only been completed for about half the country's 400 constituencies, Ekachai Warunprapha, the commission spokesman, told The Associated Press.

"We do not know when we will be able to make the official announcement," he said.

Thaksin was to hold an audience with King Bhumibol Adulyadej on Tuesday afternoon at the his seaside palace in southern Hua Hin, said government spokesman Surapong Suebwonglee, who described the talks as a procedural meeting following the election.

Thaksin's critics, who for two months have been staging rallies drawing as many as 100,000 people, rejected the prime minister's idea of a reconciliation committee as insincere and called for new anti-government protests this week, reports the AP.