WHO calls for cooperation to fight bird flu

Governments must support each other in the fight against bird flu, SARS and other emerging infectious diseases that could pose global threats to human health and economic prosperity, a World Health Organization official said Tuesday. "With infectious diseases, we are only as strong as our weakest link," Dr. Henk Bekedam, the WHO representative in Beijing, told Asia-Pacific officials at the start of a two-day international conference on new diseases. 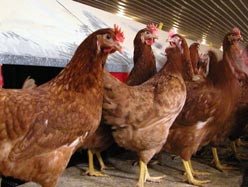 WHO calls for cooperation to fight bird flu

"If you do a good job over there, but if your neighboring country is not able to detect (disease), you're still not safe. We need to support each other," he said. Officials from the United States , China and other governments were gathered to discuss ways to fight infectious diseases such as bird flu and severe acute respiratory syndrome that have emerged in recent years.

The region's governments "have paid high attention to preventing and controlling emerging infectious diseases, yet the situation is still challenging," said Chen Xiaohong, a deputy Chinese health minister. Chen cited SARS, which emerged in southern China in late 2001, as a reminder of the dangers of new, fast-spreading diseases. The disease killed nearly 800 people worldwide in a matter of weeks.

Every year, a new infectious disease emerges and countries need to be prepared to fight it while continuing to battle HIV/AIDS and avian influenza, he said. "Globalization of economies has led to globalization of disease," Chen said. "It has exerted huge impacts on economies and international exchanges."

The best strategy to combat new diseases is through early detection and reporting by affected countries and the timely sharing of information, said Bekedam with the WHO. Bird flu, which resurfaced in Asia in 2003 and has already spread to the Middle East , Europe , and Africa , killing at least 105 people, illustrates the need for governments to work closely together, he said.

"We know it takes government commitment to deal with it. It is bad for economies but if you don't deal with it, it's worse," Bekedam said. A draft of a joint communique to be released at the end of the conference said Asia-Pacific governments are committed to focusing on prevention and control but also needed to beef up surveillance systems and emergency response plans, reports the AP.