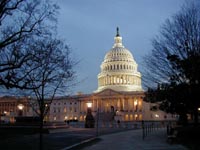 The building was reopened about an hour later after power was restored. The House of Representatives and Senate were not in session at the time of the outage. Both convened at 2 p.m. (1800GMT), the House quickly recessing for the day and the Senate resuming work on immigration legislation.

Mary-Beth Hutchinson, a spokeswoman for Potomac Electric Power Co., said the electricity shut off automatically after there was "a momentary drop in voltage due to customer operations up the lines" away from the Capitol.

"The protective equipment sensed the significant change in voltage and tripped," she said.

U.S. Capitol Police, in a statement, said a power spike that affected much of the metropolitan area "knocked out power to the Capitol building and caused lights and cable TV reception to flicker throughout the Capitol complex." In response, police evacuated the building and investigated, along with architect of the Capitol and fire officials, the statement said.

Nearby office buildings were not affected by the outage. Before the evacuation sirens went off, more than 100 visitors sat in the darkened House gallery. They left with everyone else when the alarm sounded, calmly walking toward exits, reports AP.