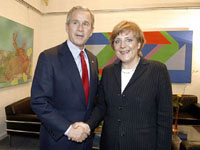 McClellan gave no details of the telephone conversation, which Bush made from Air Force One on the way from his Texas ranch to a baseball game in this Ohio Valley city settled in part by German immigrants. The call took place before the arrival in Washington of German Foreign Minister Frank-Walter Steinmeier, who will meet with Rice and other officials to discuss international developments and strengthening trans-Atlantic relations, reports the AP.