American musician and producer Quincy Jones paid a call Monday on Nelson Mandela, but a meeting between the anti-apartheid hero and supermodel Naomi Campbell was kept a closely guarded secret. Campbell, who was last week charged with assault for throwing her cell phone at a housekeeper but allowed to keep her passport because of her visit to South Africa, had met with Mandela, according to a spokeswoman for the U.N. Children's Fund. 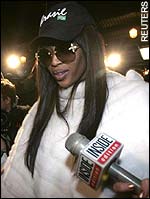 The spokeswoman, Erika Vegter, said that as far as she knew, Campbell had now left South Africa. Further details of the visit were kept secret and the Mandela Foundation declined comment. No photographers or journalists were allowed. Vegter said that Campbell was not an official guest of UNICEF but that the agency knew of her visit.

The Children's Fund is currently organizing a visit to South Africa by Jones, who won the U.S. Fund for UNICEF's 2005 Spirit of Compassion Award. He is to meet with young artists and musicians on the challenges they face in an era of AIDS, crime, sexual violence and drug abuse. UNICEF said that Jones would also learn about efforts to improve child survival and to prevent mother to child transmission of the AIDS virus.

The music star turned philanthropist founded the Quincy Jones Listen Up Foundation, a charity which connects youths with technology, education, culture and music. One of the organization's programmes is an intercultural exchange between underprivileged youths from Los Angeles and South Africa, reports the AP.