Iran successfully tested a new torpedo Monday, the latest new weapon it has unveiled during war games in the Gulf. The new ship-launched torpedo can target submarines at any depth and is powerful enough to "break a heavy warship" in two, spokesman Gen. Mohammad Ebrahim Dehghani told state television. He did not give details on the speed or range of the torpedo. 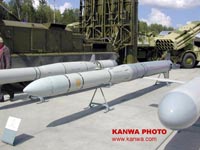 A day earlier, Iran announced it had tested a new high-speed torpedo, the "Hoot," or "whale," which moves at up to 360 kilometers per hour (223 miles per hour), saying it was too fast for any enemy ship to elude. On Friday, it tested the Fjr-3, a missile than can avoid radars and hit several targets simultaneously using multiple warheads.

Iran's Revolutionary Guards have been holding their maneuvers codenamed the "Great Prophet" since Friday, touting what they call domestically built technological advances in their armed forces, reports the AP.